TensorFlow is a popular framework of machine learning and deep learning. It is a free and open-source library which is released on 9 November 2015 and developed by Google Brain Team. It is entirely based on Python programming language and use for numerical computation and data flow, which makes machine learning faster and easier.

To give a concrete example, Google users can experience a faster and more refined the search with AI. If the user types a keyword a the search bar, Google provides a recommendation about what could be the next word.

They can all use the same toolset to collaborate with each other and improve their efficiency.

Google does not just have any data; they have the world's most massive computer, so Tensor Flow was built to scale. TensorFlow is a library developed by the Google Brain Team to accelerate machine learning and deep neural network research.

It was built to run on multiple CPUs or GPUs and even mobile operating systems, and it has several wrappers in several languages like Python, C++ or Java.

A couple of years ago, deep learning started to outperform all other machine learning algorithms when giving a massive amount of data. Google saw it could use these deep neural networks to improve its services:

They build a framework called Tensorflow to let researchers and developers work together on an AI model. Once developed and scaled, it allows lots of people to use it.

It was first made public in late 2015, while the first stable version appeared in 2017. It is open source under Apache Open Source license. You can use it, modify it and redistribute the modified version for a fee without paying anything to Google.

The word TensorFlow is made by two words, i.e., Tensor and Flow

TensorFlow is used to define the flow of data in operation on a multidimensional array or Tensor. 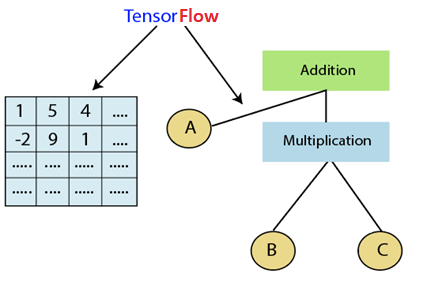